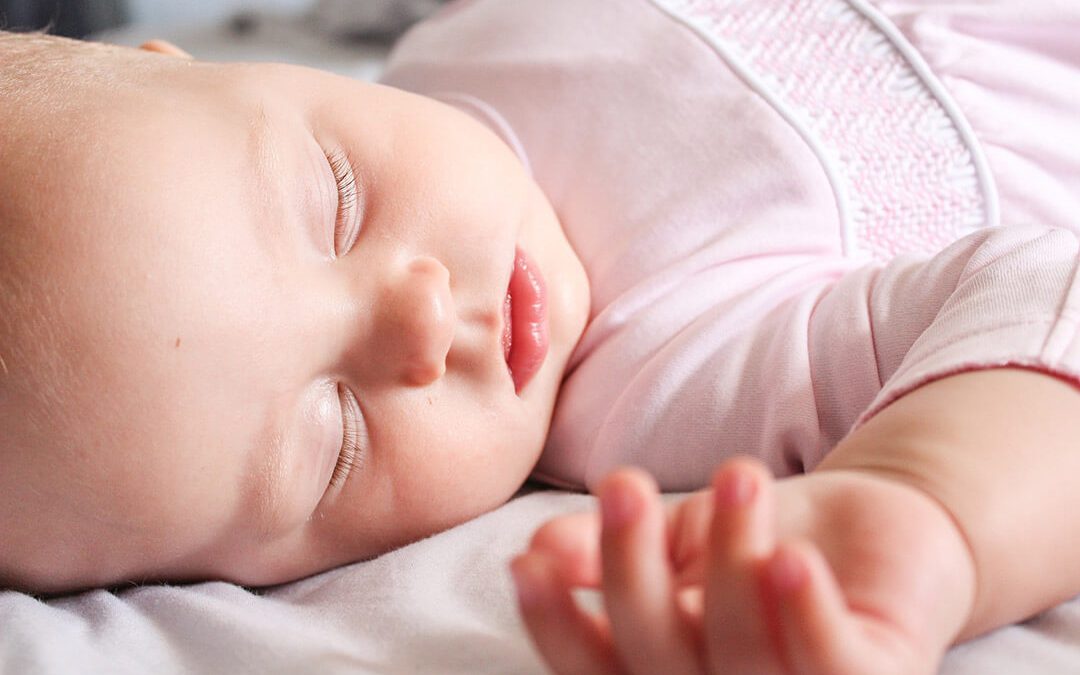 Lots of us take on freelance work because the flexibility makes it an ideal job to have when you’re parenting. However despite all the benefits, usually the ‘juggle’ means sleep (yours) is the one thing that is sacrificed. Not with me – last year I had a freelance writing job that helped my baby (and me!) sleep through the night.

I don’t know how many times I’ve googled ‘how to get my baby to sleep’ or varieties of the theme. If you looked at my search history over the past 4.5 years, you’d see ‘my baby won’t sleep longer than 30 minutes’, ‘is there a 7-month sleep regression?’, ‘is there a 7.5-month sleep regression,’ ‘is there an 8-month sleep regression’ and… well you get the picture. Since my first daughter was born in 2013, sleep has been a pretty major obsession.
From the very beginning, she wasn’t the greatest sleeper. They often say babies are ‘sleepy’ right after they’re born and ‘wake up’ when they’re around 2 or 3 weeks. Not my daughter. She was born wide awake and pretty much stayed that way. While the other babies in the hospital dozed, she had her eyes open, taking in her surroundings.
“Wow she’s so alert,” the midwives would say when they checked her over. At the time we thought this was a good thing, however, we soon learned it came with one big downside – she never slept. Her naps were short, usually just 30 minutes, and then she was awake to start the cycle again. This meant she was usually overtired and we spent hours trying to get her to sleep. This affected her night times as well – it often took hours for her to drop off then she’d rarely do long stretches of sleep.
We bought or borrowed every book we could find – from the gentle whisperings of Pinky McKay’s Sleeping Like a Baby to the rigid routines Tizzie Hall’s Save our Sleep book. I read Elizabeth Pantley’s No Cry Sleep Solution cover to cover, read countless forums and about a thousand articles online.
Things started to improve. We realised she liked to be held so would either let her sleep on us or wear her in a baby carrier. She seemed to sleep well when we were out so we downloaded a white noise app and she slept to the soundtrack of ‘market noises’. Some things didn’t work – others swore by those expensive rocking swings but she detested it and would scream whenever I used it. And no matter what I did I never manage to resettle her into that second sleep cycle.

Why didn’t we ask for help?

My biggest regret at that time was not asking for help earlier. For some reason, I thought I had to figure it all out myself. It wasn’t until she was about 7 months old that I finally visited my local Early Childhood nurse. We realised she had no idea how to self-settle. With their guidance, we taught her how which helped her nap longer during the day. This meant I could drop my overnight feeds and by 10 months, (just in time for me to go back to work), she slept through the night for the first time.
Although it felt like an absolute mission, I now know that our path was pretty common. Babies aren’t born with the innate ability to sleep. It’s a developmental milestone and there is no magical formula that will teach a baby to sleep.
Fast forward three years and I had my second child. I was determined things were going to be better and I was also going to ask for help when I needed it. It turned out, I got help in a most unexpected way.

How freelance writing helped my baby sleep through the night

When my second daughter was around 5 months old, I started doing some freelance writing for Tresillian. If you’re a parent, you might know Tresillian as Australia’s most trusted parent support organisation. I had already called them a few times to ask for help (see mantra above) so I was well aware of their reputation.
My job with Tresillian was to write parent journeys, like ‘Stevie’s story’ and ‘Karina’s story’. I did phone interviews with the mums about their children’s sleep problems and how Tresillian overcame it. These went quite well, so Tresillian asked me if I would write more. These would be published in their upcoming book ‘The Tresillian Sleep Book’.
This task involved interviewing another 12 mums. You can imagine with such a broad range of interviews, there were many issues we explored. Some babies were only a few months old, others were pre-schoolers and had only recently started sleeping through the night. I spoke to mums about their PND, IVF struggles and anxieties. We spoke about the challenges of a second sibling, of not knowing how to be the best parent we could be. It was an honour that these women were so candid with me.

At the time, my second daughter wasn’t sleeping through the night. From talking to these mums, I realised it was time to teach her to self-settle. While I was doing the interview, I would ask “so what specifically did the nurses tell you.” And the mums would run through what they’d learned. Patting on the chest, patting on the bed, saying “calm down” firmly but calmly were all techniques they mentioned. They talked about going from in arms settling to hands-on settling. Saying ‘ssh’ gently and always picking up the baby when distressed.
It was like I was getting advice from a whole bunch of Tresillian nurses without having to visit a centre. I used all the techniques (and called the helpline a few times). Gradually, our little one started to sleep in longer stretches until she slept all the way through. Hallelujah!

I’m so thrilled that now we all have the advice of the Tresillian nurses at our fingertips. This week, ABC Books have released the new Tresillian Sleep Book and it’s so good. Easy to read, gentle and flexible advice with lots of things to try. There are age-appropriate routines that aren’t strict and won’t make you feel like a failure if your child doesn’t nap between exactly 12:55 pm and 2:17 pm. All my new parent friends will be receiving this as a present in future.
It’s great to know that if it isn’t working, you can still go to your early childhood centre or call Tresillian for advice. How lucky are we parents in Australia that there is so much help available?
Of course, my kids still wake up overnight every so often. Sickness, nightmares, the room being too cold, too hot or too dark all result in the inevitable calls for ‘mummy’ (why not daddy?!). That (and the inevitable eye bags) are a part of early parenthood that I’ve become used to. At least these days it’s more of an anomaly than an every night occurrence which is good enough for me!

Read some of my previous blogs:

Get an email whenever I publish a blog.